Glory Bells Band was a hard rock band from Stockholm, Sweden, from 1980 to 1985. Glory Bells was the band, the pioneer of heavy metal in Sweden, who started the wave of Swedish heavy metal band.


1980 - When it began
The history begins in a suburb of Stockholm. Two different band joined together in 1980 and decided to start a new common band. The guys was Mats Andersson (guitar), Franco Santunione (guitar), Miguel Santana (guitar), Bo Andersson (bass) and Stefan Sverin (drums). Now the band needed a singer and contacted Glory North, who was available at the time, and he accepted.

When Glory Bells Band started, Stefan Sverin played drums but he quit the band after a short while and went to "Size 46", a synthpop band who later on changed their name to "Fake". Peter Udd replaced Stefan Sverin behind the drums in the end of 1980. Glory North became the bands front man. 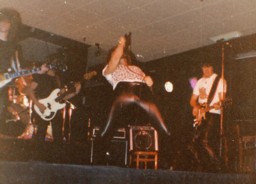 In 1981 Glory Bells Band played live at clubs in Stockholm with surroundings. One night the band played at the rock club "Underground" in Stockholm. After the gig, a guy from a record company came forward and stuck a record contract in their hands. This was a very pleasant suprise for the guys.

During 1981, Glory Bells recorded their First album "Dressed in black" at "Decibel Studios" in Stockholm. Due to a shortage of studio time, they could not work with the songs as much as they liked!

The band gave Glory the honourable task to design and draw sketches to the covers of the bands albums. An art firm took over and fulfilled his ideas. The front cover of "Dressed in black" illustrates the bell ringing in the introduction of the track "Sir Lionheart".

In 1982, Glory Bells wrote new songs for their next album. They had to make a demo tape for the record company which they recorded in their own rehearsal studio.


1983 - On strike
In 1983 Glory Bells Band went into the studio and recorded their Second album "Century Rendezvous". Even this album was recorded under pressure due to shortage of studio time. The basic recordings was made at "Decibel Studios" and additional recordings were made at "Bastu Studios" in Stockholm.

The band had struggled with the record company ever since their First album got released. The guys decided to go on strike when the Second album was nearly completed. This led to a lot of arguments with the record company, but they finally got paid for their First album. Although the amount was not enough they decided to take the money and finish the Second album.

The album was mixed at "Soundtrade Studio" and the track "Big thunder" illustrates the front cover of "Century Rendezvous".

The album release date was delayed half a year because the record company did not pay the engraver contractor in time.


1984 - Century Rendezvous
In 1984 the Second album "Century Rendezvous" finally got released. New gigs came up and the band visited a lot of places in Sweden. A memoralbe gig took place at Gröna Lund, a respected outdoors stage in Stockholm. 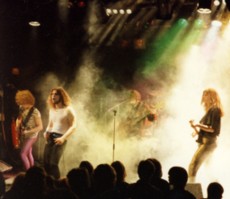 The Second album did also get great reviews from the press. The album was also released in Japan, Germany and the BeNeLux-countries. Local record dealers in many other countries imported the album for their markets why the album was distributed over all continents. The record company talked about a tour in Japan. This tour never came true, the record company pushed the tour date forward in time as with everything else.

In the early autumn of 1984, Miguel Santana (guitar) and Bo Andersson (bass) left the band because of all the problems with the record company. Glory Bells Band played further on with only two guitar-players, instead of three. Tomas Nugis replaced Bo Andersson on bass.


One of the bands last gigs took place, the 13 of December, at Örnsköldsvik icehockey arena.


1985 - When it ended
The record company promised more than they could keep, Glory Bells and the record company was in constant conflict because of this. The problem weighed down on them until they finally had enough and, in the cold and dark time of January 1985, Glory Bells Band dissolved!

The record company handled and administrated the bands fan mail which came from all over the world. They showed only some fan letters for the band why not all the letters was answered by the guys themselves. Glory Bells Band would like to Thank their fans for everything! THANK YOU!

2002 - Reunion
A reunion took place in May 2002. Glory Bells Band played for one night to celebrate Franco Santunione at his big birthday party.
The line up was Glory North - vocals, Afro Santunione - guitar (Francos brother), Miguel Santana - guitar, Tomas Nugis - bass and Peter Udd - drums. The guys had been trying to locate Bo Andersson but could not find him at the time. Mats Andersson was on tour with his own band and could not participate.

The band kept the gig a secret from Franco, and when they went on stage that evening, it took him totally by suprise! The gig was really, really fun for the guys in Glory Bells Band.


2008 - Tragedy
Glory North died in February after a long time of sickness. What a tragedy! He fought so many battles but he could not win the war. His death is unbelievable for us all and we miss him so much!

Glory had a true passion and love for music. He was a great musician and songwriter, and he encouraged us to play long beyond that we did not thought that we could do. We remember his sense for details, precision, patience and he was one hell of a singer and a true friend. We all have grief in our hearts and the world will never be the same!